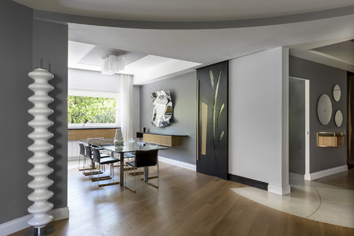 The touch of the architect Clelia Pascale in the renovation of this modern Roman apartment was incisive, especially in the perspective effects of cross-sections and openings, and the continuous geometric references that harmonize the rooms. An example of this is the kitchen, where the floor, ceiling, accessories, and furnishings play with the theme of the circle.
The partnership between Pascale and Officina Alviti was extremely successful: Cristiano Alviti intervened in the realization of the graniglia tiles with brass inlays, a technique in which he is a master and which, despite having been forgotten, will soon become a new trend; in the creation of the three very original bathrooms, clearly inspired by the 1950s; in the construction of the sculptural doors which, when necessary, act as sliding screens.
An exemplary apartment full of brilliant architectural solutions, a balanced mix of design and superior craftsmanship, which features decorative elements that help to warm a linear environment devoted to practicality.